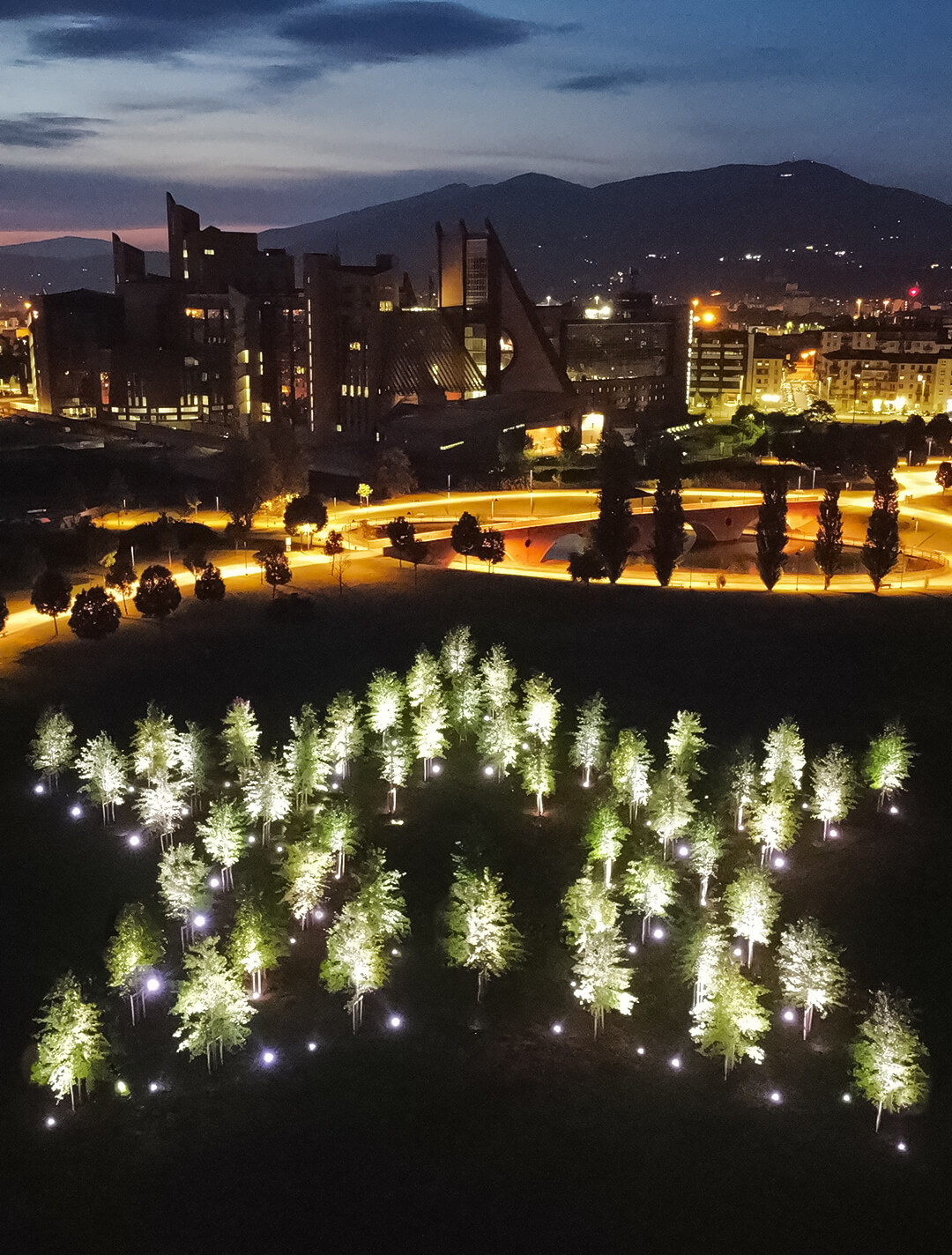 On Wednesday, June 9, in the San Donato Park of Florence, Dante’s Star (La Stella di Dante), an environmental installation created by Felice Limosani with the scientific contribution of Professor Stefano Mancuso, the landscaping supervision of CNR researcher Alberto Giuntoli, and the patronage of the City of Florence, was presented for the commemoration of the 700th anniversary of the death of Dante Alighieri. The Florentine fashion brand Il Bisonte SpA offers this gift with great symbolic value to the city as a lasting legacy for the benefit of the community and the environment.

Felice Limosani’s environmental installation art symbolically translates phrases that close the three canticles of the Divine Comedy: “Thence we came forth to rebehold the stars.” (Inferno); “Pure and disposed to mount unto the stars.” (Purgatory); “The Love which moves the sun and the other stars.” (Paradise)

The project was created in the heart of the San Donato Park in the Novoli district with 50 oak trees of the Quercus phellos species, also known as the willow oak, six meters tall and thirty years old.

Dante’s Star is situated in the first urban area of Florence, the protagonist of great expansion following the housing boom of the 1950s and 1960s. The same area was recently at the center of an impressive urban redevelopment project in which the park was created as a green area connecting new university facilities and residential buildings on one side and the City Courthouse on the other, and intended to improve the livability of the area.

The eastern tip of the Star points precisely at the Courthouse, which also symbolically intends to make amends for the Supreme Poet’s undeserved exile. With its artistic design, Dante’s Star will contribute to enriching the landscape as well as the cultural content of the space, creating a new identifying point of reference for the San Donato Park. Furthermore, the increase of shaded area will make the park more attractive and usable by citizens, creating a new place for meeting and sharing space.

The installation — which extends for more than 180 meters in width and will be visible from Google Earth and from planes departing and arriving at the nearby Peretola Airport — is destined to change chromatically with the seasons. In the fall, the leaves will gradually turn yellow and then red, and as they fall from the branches, they will create a star design directly on the ground.

As stated in the scientific report by Professor Stefano Mancuso with Pnat (Project Nature), a spin-off company of the University of Florence co-founded and directed by the professor, the artistic intervention of Felice Limosani will have a positive impact on the environment, thanks to the absorption of carbon dioxide and the release of oxygen by the oaks, the capture of polluting compounds present in the air — such as fine dust and nitrogen oxides — and the consequent reduction of their dispersion in the environment. It will also clearly contribute to improving urban water management due to the increased permeability of the soil and a resulting decrease in environmental management costs.

The trees, properly tended and cared for, will therefore provide aesthetic, social, environmental, and economic benefits in the years to come.

“This is not just a simple planting of trees, but a genuine work of art in the midst of the San Donato Park in Novoli, made even more striking by the nighttime illumination that emphasizes its star shape,” declared Mayor Dario Nardella. On the 700th anniversary of Dante’s death, this is another way that Florence is commemorating the Supreme Poet, and this time it will be beautiful to be lost in the ‘dark forest’ of these oaks.”

“The citizens of the San Donato Park asked for more trees and shade in the park,” said Environmental Councilor Cecilia Del Re. “These 50 large trees have reached this first objective. The collaboration between public and private is important for our green areas. The city took over the management of the San Donato Park last year, and Saturday we will be here with our citizens to listen to their proposals to improve its usage. In the meantime, this environmental art installation will help mitigate the climate, enhancing this area from every perspective, especially environmentally and socially.”

“I interpreted Dante’s ‘vivid language’, transforming the stars that reappear in the closing phrases of the three canticles of the Divine Comedy into a ‘living’ installation. Inspired by Dante, I experimented not only with the aesthetic function of the project, but also sought broader connections interpreting the meanings that the Supreme Poet left us. In this historic moment, creating long-term value between art and the environment with the person at the center is a priority,” said Felice Limosani.

“I think that if Dante wrote today, the forest would no longer be such a dark place and the celestial city would become green. This work by Felice Limosani reminds us that plants can change the future of our cities,” Professor Stefano Mancuso pointed out.

“The beautiful Italian landscape that we have inherited is the result of the passage of time. It is our duty to take care of it by preserving its historical and cultural values, but also to keep it alive and representative of the identity of the community it represents. Contemporary art offers us the opportunity to give it new life-blood, exactly like the work that Felice Limosani created for Florence,” Alberto Giuntoli confirmed.

Luigi Ceccon, CEO of Il Bisonte, stated: “With the commemorations of the Supreme Poet, we want to honor the universality of Italian culture and the city of Florence to which we owe our 50 years of history and with which we want to continue to grow in the future. Dante’s Star is an artistic portrayal of our values of environmental sustainability and social responsibility, but also a legacy for the next generations and a gesture of gratitude to the community.”